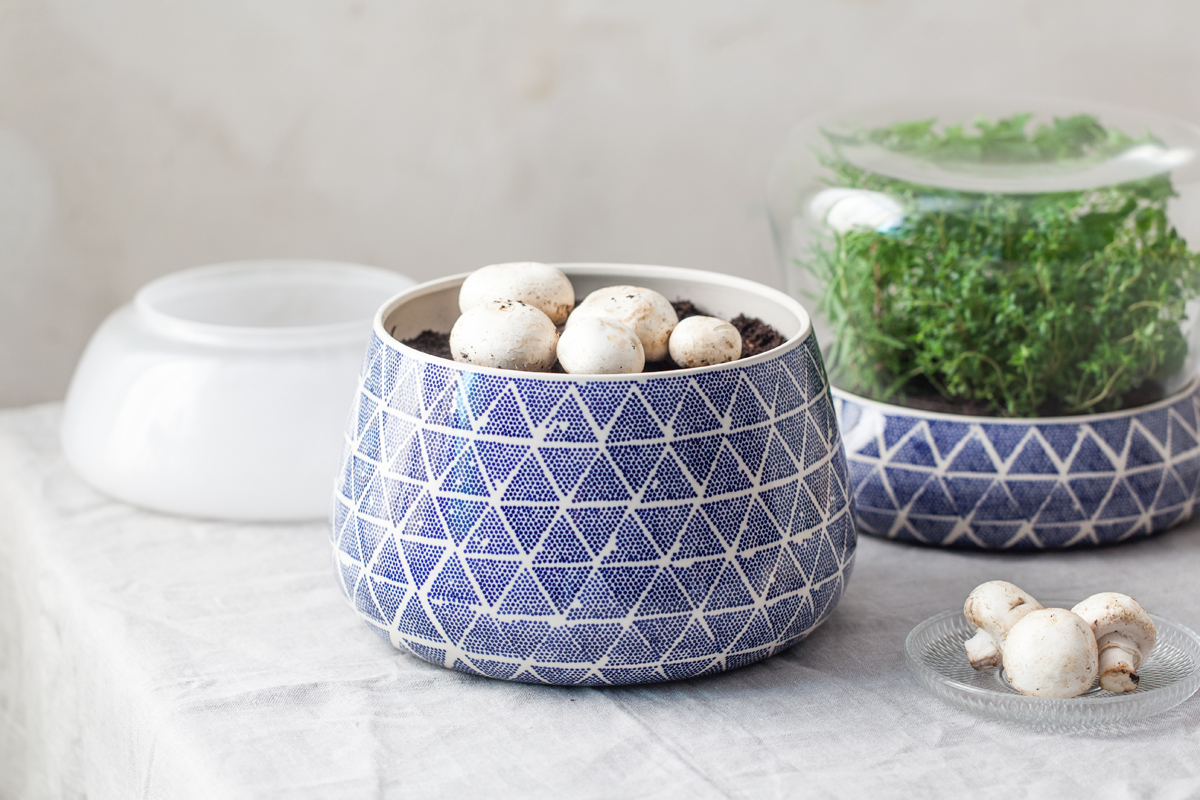 
I founded "Plantation" in glasses and shotglasses previously abandoned on the streets of London. These items were undamaged! They were just thoughtlessly abandoned! – unprecedented extravagance has become the norm in the modern world.

The glasses I collected and photographed bear the names of the streets where I found them. In these glasses I grow plants. I create special structures for them – installations consisting of multiple components based on hydroponics, enabling observation of roots, stems and leaves, as well as the whole process of the growth of cultured plants.

In the "PLANT-A(k)CJA" project I treat my plants as a starting point for activities in the social space. I use ceramics and glass in works that have a utilitarian function as well as being objets d'art. Crafts – rightly – have gained  the status of luxury, both in the field of art and design. This is a consequence  of the direction in which modern civilization is heading.

Luxury and rubbish continue to remain in the orbit of my interests.

All these senses are responsible for our perception of wellbeing, together they decide what kind of adventure we have when food is served to us. Alicja’s series of transparent glass vessels is not noticeable by itself – it comes to life when it is interpreted by the cook. The designer says: I want these objects to be invisible, to be enriching rather than dominating, to be open to the cook’s interpretation rather than suggesting a use. The oblong glass vessels have two bases – top one reserved for the taste buds, the bottom one visible from above but separate from the top one is destined for the taste enriching experience.

The PLANTATION was established because of the need to find a remarkable, almost symbolic use of what has been abandoned. The result is a porcelain object that rests in a common glass and which allows the observation of the growing process of plants, both its stem as well its root. An investigation into the recycled function for the glass was inspired by the debris of London’s streets. The nightlife of the city leaves behind many traces – among them abandoned glasses in the most unexpected places. In examining this phenomenon the artist spent over a month in the early morning, between 4-6am, searching the streets and collecting glasses from bus stops, benches, curbs, alleys, gates and even shopping carts. Subsequently the many shapes of these discarded items have led to an assortment of handmade parts that can be inserted into a variety of glass vessels sizes. These unique porcelain components are suitable for growing plants and when turned upside down it can be used as a mini greenhouse, ideal during seed germination. This project allows the function of an ordinary glass vessel to be to reinvented and given a new context and purpose. Look for the many possibilities that surround you to create your own home breeding PLANTATION!

The LAB Series is a tabletop greenhouse planting lab. There are two products in the series: MushroomLAB and HerbLAB. The LAB Series is not only a beautiful and intriguing decorative piece inspired by morning dew in the forest it also has a practical application as it allows plants and mushrooms to be grown under a glass dome. The MushroomLAB is a unique greenhouse whose lid of matte glass dims the light, while the stoneware base ensures the right humidity under the dome. The two solutions guarantee perfect conditions for growing mushrooms and only blurry shadows penetrating the ground glass of the dome betray the piece’s real function. Is there anything tastier than home-grown mushrooms and herbs from your little secret lab? This tabletop greenhouse is meant as a planting laboratory. The series is a continuation of one of Alicja Patanowska’s graduation projects in the Royal College of Art. The potential of this project was first noticed by the Regional Museum in Stalowa Wola, Poland. The Museum funded the prototypes of the LAB Series for the Helsinki exhibition MODERNA – Crafts and Industry. In collaboration with MANUFAKTURA, a traditional Polish stoneware manufacture, and KROSNO glass factory, Alicja Patanowska is now finalising the LAB design brand offering the opportunity to reunite with nature and tradition.

The STRATUM Collection is a project that combines different media in a dialogue between two craft skills – glass blowing and throwing on the wheel. Talking about space Patanowska is questioning the definition of containment.

Archaic and modern.
Unique and common.
Calmness and muddle.
Unique spinning fleshiness of movement and plain smooth surface. Two extremely different techniques applied: archaic potter’s wheel and state-of-the-art casting combined by the nobility of porcelain. Both the technique and the material highlight the balance resulting from the contrast.

ALICJA PATANOWSKA
Graduated from the Eugeniusz Geppert Academy of Art and Design in Wrocław, the Faculty of Ceramics and Glass, Poland, 2011. Studied at the Royal College of Art, the Ceramics & Glass programme, London, UK, 2012–2014; MA degree, 2014. One year Erasmus scholarship in Istituto Superiore per le Industrie Artistiche (ISIA), Faenza, Italy, 2008–2009; the President of Wrocław Scholarship, 2008–2009; scholarship of the Minister of Culture and National Heritage of the Republic of Poland.

She has been granted several awards, including: an honourable mention in the Made in Macef design competition, Food Design project, Milan, Italy, 2009; first prize in the “Innovative Artwork” Championship in Mondial Tornianti, Faenza, 2010; winner in the ART OF PACKAGING, the Free Style – Debuts category, Poznań, Poland 2012; The Charlotte Frazer Award 2014 from the Royal College of Art.

She has participated in 3 solo exhibitions in Poland, including: “Use It!”, International Ceramics Center, Bolesławiec (as LESSDESIGN), 2012. She has also participated in several group exhibitions in Poland and Azerbaijan, Bulgaria, China, Denmark, Estonia, Finland, France, Germany, Italy, Romania, South Korea, Switzerland, Ukraine and UK, including: UNPOLISHED 15 – YOUNG DESIGN FROM POLAND, the National Museum of Art of Romania, Bucharest, Romania, 2012; EXPO, Milan, 2015.

She is a member of the Association for the Promotion of Young Artists “Grawiton” (Stowarzyszenie na rzecz Wspierania Młodych Artystów “Grawiton”) and design squad LESSDESIGN; she collaborates with the International Ceramics Symposium “Porcelain Another Way” in Wałbrzych, Poland.

Her works are in several private and public collections in Poland and abroad, including the Shanghai Museum of Glass, China.
She has found her interests mostly in sculpture and design. Patanowska combines traditional techniques with modern technologies. She is inspired by folklore.

She lives and works in London and Wrocław.